​Although they have already suffered relegation this season, Jan Siewert will still be careful with his lineup selection as his Huddersfield side travel to the Tottenham Hotspur Stadium on Saturday.

The Terriers - who have lost their last five Premier League games - will be looking to upset their hosts' Champions League hopes for next season as they battle with Arsenal, Chelsea and Manchester United for the third and fourth places.

Having suffered a deflating ​4-1 defeat to Leicester City on the weekend, Siewert's side may be very up for causing an upset on Saturday.

Here's a look at how Huddersfield may line up for ​Saturday's clash. ​Ben Hamer (GK) - The former ​Leicester goalkeeper had a decent performance against his former club last week and was unlucky to not save ​Jamie Vardy's penalty despite getting a firm hand to it.

Tommy Smith (RB) - After tearing his hamstring against Arsenal, club captain Tommy Smith has barely played for ​Huddersfield this season. Expect the away side's defensive line to become more organised with his presence.

Christopher Schindler (CB) - The 28-year-old German has been consistent in the lineup this season, earning himself 31 league appearances in the 2018/19 campaign. His experience in the Huddersfield set-up could help thwart ​Spurs' attacking threat this weekend.

Terence Kongolo (CB) - Another seasoned Huddersfield defender, the Dutchman has already scored this season and could certainly provide a threat in offence against Spurs on Saturday. However, the central defender was poor against Leicester, so could be given the chance to redeem himself this weekend.

Erik Durm (LB) - Former ​Borussia Dortmund player and Germany international Durm has only appeared for the club 23 times this season, yet the 26-year-old has got himself an assist and a couple of clean sheets along the way. Alex Pritchard (RM) - The former Norwich man has plenty of experience playing against top sides. Having also been a Spurs player himself, he'll certainly want to impress in front of his former fans on Saturday. Having made 27 appearances this season as well, Pritchard can certainly offer an experienced attacking threat on Saturday.

Jonathan Hogg (CM) - Having started the majority of games in the 2017/18 season, the former ​Aston Villa man has earned himself over 150 competitive appearances in a Terriers shirt. A veteran in the heart of midfield, he may not have had the best season for Huddersfield, but his presence gives the midfield plenty of experience.

Jon Gorenc Stankovic (CM) - Although the Slovenian defender has struggled for game time during his time at the club, the 23-year-old played in midfield against Leicester and was substituted after picking up a yellow card.

Chris Lowe (LM) - A left back by trade, the German defender has been push further forward by Siewert and will most likely play there against Spurs. With both attacking and defensive abilities, the 29-year-old can offer support at both ends.

Aaron Mooy (AM) - The Australia international has largely been Huddersfield's shining light this season, despite being injured for a portion of it. The 28-year old has had two good seasons in the Premier League for his club, and netted a coolly struck penalty against Leicester on the weekend. His name will surely be the first on Siewert's team sheet come Saturday. 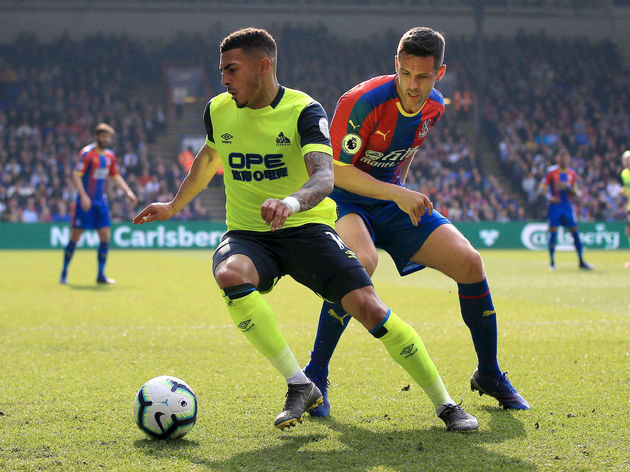 Karlan Grant (ST) - The young English striker - who has scored three goals in seven appearances this season for Huddersfield - has seriously impressed in his brief time at the club and is capable of bagging a goal or two this weekend. Although he should start against Tottenham on Saturday, it seems a lot of Huddersfield fans will be more concerned about whether he stays next season as they prepare for life in the ​Championship.