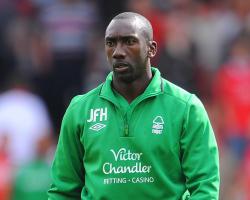 Huddersfield 0-0 Sheff Wed: Match Report - view commentary, squad, and statistics of the game as it happened.Yorkshire rivals share spoilsSheffield Wednesday striker Stevie May and Huddersfield substitute Nahki Wells went closest to breaking the deadlock as the lunchtime Sky Bet Championship Yorkshire derby ended goalless at the John Smith's Stadium.May, who won his first full Scotland cap against England on Tuesday, fired in a 74th-minute shot which struck both crossbar and post, while Wells twice forced Wednesday goalkeeper Keiren Westwood into excellent saves after stepping off the bench in the 68th minute.Huddersfield goalkeeper Joe Murphy pulled off the save of the game to deny Wednesday winger Royston Drenthe a last-minute winner, shortly after Wednesday could have been awarded a penalty.The West Yorkshire club extended their unbeaten home record to six matches, while Wednesday have drawn seven of their last 11 fixtures.Diego Poyet, for Huddersfield, and Sheffield Wednesday's new loan signing Lewis McGugan both made their debuts for their respective clubs, while Murphy started in goal for the home side after Alex Smithies suffered a back spasm

Winger Royston Drenthe returned from suspension for the visitors.McGugan fired a shot over the crossbar and Gary Taylor-Fletcher failed to connect properly with Jacques Maghoma's cut-back as Wednesday created the better early chances, while Huddersfield winger Sean Scannell sent two low crosses fizzing across the six-yard box at the other end.Jacob Butterfield's slide-rule pass then carved open Wednesday's defence midway through the first half, setting Tommy Smith free on the overlap, and the right-back's raking cross was snuffed out by visiting centre-half Tom Lees' last-ditch near-post lunge.Scannell turned neatly in the box to clip another inviting pass across the face of goal shortly before half-time as Town gained the upper hand, but a blue shirt failed to get on the end of it.Wednesday left-back Jeremy Helan thwarted the charging Scannell with a timely challenge and on-loan centre-forward Grant Holt headed left-back Paul Dixon's cross over soon after the restart.Butterfield dragged his shot off target after Harry Bunn's backheel on the edge of the box and Scannell again threatened to break the deadlock when he raced into shooting range and blazed an angled drive over the crossbar.It needed something more incisive against a Wednesday defence that has kept 10 clean sheets this season and in the 68th minute Town boss Powell sent on striker Nahki Wells for Conor Coady.Wells' response was almost instantaneous as he darted through on goal, only to see his shot parried by Wednesday goalkeeper Keiren Westwood.But Wednesday went closest to scoring the game's opening goal in the 74th minute when May pounced in the box and lashed a rising shot which beat Murphy and struck the crossbar and then post before bouncing clear.Wells then wasted a free-kick when he curled his effort high and wide after being hauled down by Wednesday skipper Glenn Loovens and blasted a shot straight at Westwood after finding himself in the clear with six minutes remaining.Wednesday were denied a late spot-kick when substitute Chris Maguire went over Joel Lynch's challenge but was harshly booked for simulation.Drenthe then sprang the offside trap in time added on, but his well-struck curling shot was brilliantly turned away by Murphy to ensure the spoils were shared