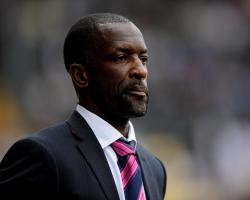 Huddersfield 0-0 Wigan: Match Report - view commentary, squad, and statistics of the game as it happened.Powell's Terriers battle for pointChris Powell's wait for his first win as Huddersfield manager continues after his side were held to a 0-0 draw at home to Wigan on Tuesday.The former Charlton boss was denied a first point in charge at the John Smith's Stadium on Saturday after a stoppage-time penalty gifted Middlesbrough all three points.But the Terriers were not to be denied for a second time as they produced a battling performance to ensure Uwe Rosler's side remain without a win on the road so far this season.Powell made two changes to the side beaten by Boro at the weekend, Danny Ward replacing Harry Bunn while veteran forward Jon Stead deputised for the injured James Vaughan

The Latics opted to keep faith with the same side that went down 3-1 at Blackburn last time out after midfielder Emyr Huws was passed fit before kick-off.Both sides were guilty of some errant first-half finishing

The hosts could have taken the lead inside the first five minutes had Danny Ward's cross-cum-shot not been acrobatically halted on the line by Andrew Taylor.Ward tested visiting goalkeeper Scott Carson with a dipping effort shortly after but the former England stopper held it well before the Latics began to dominate the latter stages of the half.First Andy Delort drew a fine save from Alex Smithies with a powerful long-range drive and then Callum McManaman went closer still

The tricky winger rounded Smithies after collecting Don Cowie's well-weighted through ball but saw his goal-bound effort well blocked by a combination of Joel Lynch and Mark Hudson.McManaman was again the centre of attention just after the half-hour mark when he went down under pressure inside the penalty area

But, despite his protests, referee Seb Stockbridge produced a yellow card having decided the former England youth international had dived.Wigan started the second half in similar fashion as Smithies twice had to be alert to keep out efforts from Huws in the opening couple of minutes.But the Terriers looked dangerous on the counter-attack following the introduction of Sean Scannell at the break, and the attacker was unlucky to see a fizzing delivery scooped away from his own goal by the experienced Emmerson Boyce.Delort fired another warning shot at the opposite end before another dangerous delivery from Scannell was again hooked from under his own crossbar by Boyce.Town lost defender Lynch to injury in the closing stages but looked the more threatening of the two sides once substitute Murray Wallace had settled alongside Hudson at the back.But Powell must wait until Saturday's West Yorkshire derby with Leeds at least for a win after Carson's late save to deny Stead rounded off a frustrating evening for both sides in front of goal