Huddersfield vs Wolves: Where to Watch, Live Stream, Kick Off Time & Team News

​Huddersfield welcome Wolves to the John Smith's Stadium hoping to finish the day with at least something to cheer about following a forgettable Premier League campaign.

Defeat to Newcastle on Saturday consigned the Terriers to their 20th loss of the campaign, leaving them 14 points adrift of safety, all but assuring their place in the Championship next term.

​Wolves meanwhile continue to surpass expectations and reside in eighth place in the Premier League following a late draw away at Bournemouth on the weekend. Nuno Espirito Santo's team will be looking to avenge the 2-0 defeat they suffered at the hands of the Yorkshire side in the reverse fixture back in November. Check out 90min's preview of Tuesday's clash below.

Fortunately for Jan Siewert he has inherited a team in good physical shape, with no players missing through injury for Tuesday's showdown. The only absentee for the German is club captain Tommy Smith, who was sent off against ​Newcastle last time out and will miss the game through suspension. The biggest concern to him is choosing the best side available to gain any sort of positive result in their quest for a miraculous escape from relegation.

Similarly, Santo has a clean bill of health throughout his squad, with no players in risk of picking up a suspension and all players who suffered knocks recently back in action.

Having kept the same side for much of the beginning of the season, Santo has began to tinker with his starting XI more recently, with the likes of Leander Dendoncker enjoying a good run in recent weeks.

​Huddersfield's best result of the season came in the reverse fixture back in November as an Aaron Mooy double earned them a surprise 2-0 win at Molineux, in one of only two wins for the Terriers this term. The result was a blip in what has been an outstanding season for Wolves though, as the visitors left fully worthwhile of the three points on that occasion. In the last four meetings between the sides, the Yorkshire outfit have emerged victorious on each occasion with three 1-0 wins in the Championship offering a inkling of hope to Siewert ahead of the match.

Overall, in the 83 previous meetings between the sides, Huddersfield slightly edge their Midlands opponents with 37 wins to the visitors' 32.

Having pulled off nothing short of a miracle and staying in the top flight last season, Huddersfield have been unable to push on and begin establishing themselves as a key fixture in the ​Premier League.

Their loss against Newcastle on Saturday was their 20th of the campaign and puts them on a barren run of 16 matches without victory, the last one coming against Tuesday's opposition Wolves when they ran out 2-0 winners.

⚽️ Two goals in the space of seven minutes wrapped up all three points for Newcastle United at St. James' Park on an afternoon where Tommy Smith saw red in the first-half.

A significant issue for Siewert to deal with is their lack of ability in front of goal, having netted just once in their last seven matches and just 14 times all season.

Santo's Wolves have been surpassing expectations all season but have found themselves winless in their last two league outings. A draw against Newcastle at home was succeeded by another 1-1 draw away at ​Bournemouth on Saturday, but it still kept them in the top eight in the division.

Wolves battle back to come from behind and earn a draw on the road. Another point on the board. Attention now turns to Tuesday night's trip to @htafcdotcom.

Here's how the two sides have performed in their last five fixtures:

Wolves have been nothing short of outstanding this season, as while the managers at the top end of the table always get recognition, Santo should be in with a shout for manager of the year. His side play to their strengths and are very capable of shutting up shop, while equally effective at getting the ball down and playing football that's mightily easy on the eye. 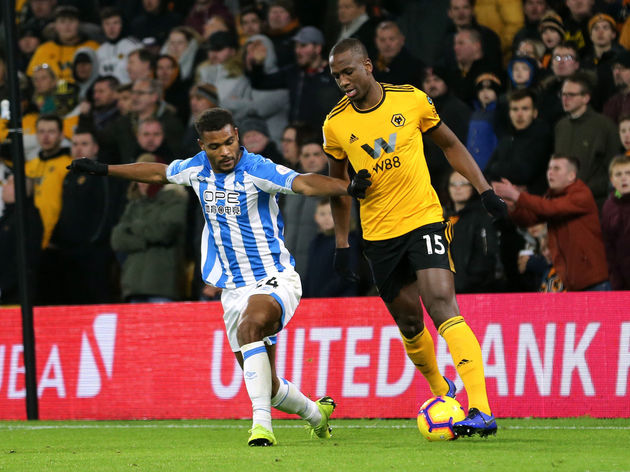 Huddersfield are down, as even the most staunch Terriers' supporters will tell you, but they certainly won't go without a fight. Thus, they could add to their miserably low goal tally and at least give their excellent home support something to cheer about, but they won't come away with three points on this occasion.